We brought Buddy into the vet yesterday afternoon and as soon as our sweet vet walked in to the room he piddled. Took her 5 seconds to tell us he has a UTI! Yep, his urine stinks pretty bad. We’re talking, open the windows and where’s the air freshener? stink. GAG. We had chalked it up to his med’s causing the smell. Well, now it all makes sense. DAH. His little dribbles here and there and his larger pee accidents are caused by either a bladdar infection or a urinary tract infection. He doesn’t empty his bladder out as well so he’s got this cesspool going on inside of him. Our vet wanted to analyze his urine to be sure (even though we all know it’s a no brainer). Here’s where the soup ladle comes in. She tried massaging him in the office to get him to pee but no luck. So outside we went with the vet tech and a soup ladle to catch his pee. I don’t know why I find this so funny but I do. (One must find humor in every situation.) Steve helped Buddy along outside with his harness and my job was to alert the tech when Buddy squatted so he could play catcher with the ladle. “There he goes!” I shouted! And quick as lightening that tech had that ladle right under him. Best pee catcher on the league. And back inside we went with the freshly caught pee. Nice.

On to the pressure sore. It had gotten pretty nasty to where it was red from infection and now a small crater had formed. This was all caused by the under strap’s of his harness. He need’s a lot of help getting up and when he goes potty outside. Even though the straps are padded, they cut into him pretty hard. Over time, it has caused a pressure sore. We had an older version of the Ruffwear harness without the brush guard. I don’t think the brush guard attachment was out yet when we first got his harness. My advice to older Tripaw owners or if your furry friend is in a situation like ours where they need a lot of assistant is to look into purchasing this attachment if you don’t already own it. Amazon sell’s it for about $25. It will distribute the weight more evenly on their underbelly. Or maybe even look into the sling type harness that Tripaw has. Ok, so we really need to get pressure off of that sore. The new harness attachment will help but still, there needs to be as little pressure as possible on that sore. So we picked up some foam insulation tubing that goes around your pipes at Home Depot. We cut a square off and cut a hole in the center. The hole is where his sore goes and TA DA!, it takes pressure away from that sore. I’ll attach a picture at the end of this post. We are still playing around with the best placement of it and it’s not easy to put his harness on but eventually we will get it down to a science. He’s on Clavamox for the infection as well. All in all it was a pretty good vet visit with solution’s to some pretty messy problem’s.

We continue to embrace his senior citizenship. (To bad he can’t carry a card with him so we can get cheaper dog food) Here’s looking forward to better smelling pee, healing pressure sore’s and continued patience for that ACL to heal! 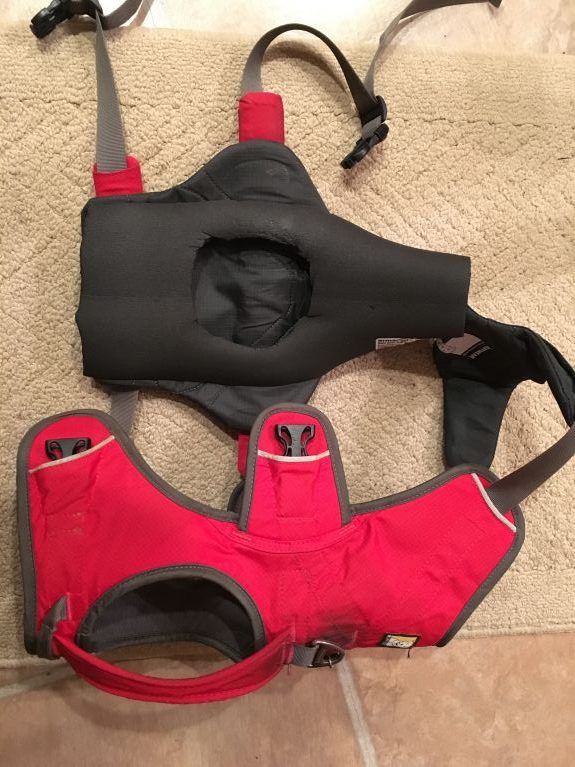 This is the underside of his harness with the brush guard attachment. We attached the foam and cut out a hole where his sore is.

It’s been awhile Tripaw family so I thought I would check in. Our sweet boy is doing ok these days. He suffers from an ACL tear (which happened before Thanksgiving) in his back leg. NO fun for an old guy. Its tough on those back legs. Some days are better than others. He is not getting any better but he is not getting any worse. We understand it takes a long time for these things to heal and thats ok. We decided against surgery given his age. We tried some braces from Amazon and they just didn’t work for him. His pain seems to be doing ok. Sometimes it’s hard to tell because he can be so stoic when it comes to pain. He’s a prideful old guy! He’s on Tramadol 3 times a day and Rimadyl twice a day as well. The added Rimadyl has been helpful. He has small pee accidents here which is just age related. Our vet explained that its probably aging kidney’s and not being able to concentrate his urine. So all the water he drinks goes straight through and is produced into urine. As a result the bladder fills up frequently and a lot of the time they can’t empty it as much as they need to and so there is an overflow issue. It’s also hard to squat to urinate so they tend not to empty their bladder completely when they do go outside. He used to mark his spot everywhere he went. When your back legs don’t work so well you only want to go once while you’re out there! Especially if its 15 degree’s!

Our newest issue is a nasty pressure sore right where the strap of his harness hits on his underside. We hadn’t noticed it until yesterday when it started to seep. At first I thought it was a tumor we hadn’t noticed (he has fatty lumps everywhere!) but given where the harness hits, its probably a pressure wound. The front under-strap pushes very hard into him especially when he goes out to poop. He needs alot of assistance. He can squat down but we have to hold him up full force with the harness. OUCH. He needs alot of help getting up as well. So lots of pressure on that underbelly. I texted the vet again. She suggested a new harness. Right now he has the Ruffwear. We just ordered the AST Get A Grip harness through Tripaw in hopes that it won’t hit that area as hard. But now I see Ruffwear has a Brush Guard so we ordered that off of Amazon as well. Hopfully one of these will help stay away from that area. In the meantime off to the vet we go. 🙁 I understand these wounds are nasty and hard to heal. It would be super helpful if his back legs would just start kicking in so that we can stop having to help him around with the back handle of his harness! UGH!

All of these new phases of old age have made us think and ponder when enough is enough. We love him enough to know that quality of life is what comes first. We had some good hard talks with our beloved vet earlier this week. Together, we have agreed with her, that he is not there yet and pray that the good Lord will help see when it is his time.  He enjoys his naps in the sunshine and Lord knows he loves his chicken treats! So we will just keep trucking on and hoping the vet can help his new wound. Praying he gets more strength in those rear legs soon too! 🙂 Cheers! 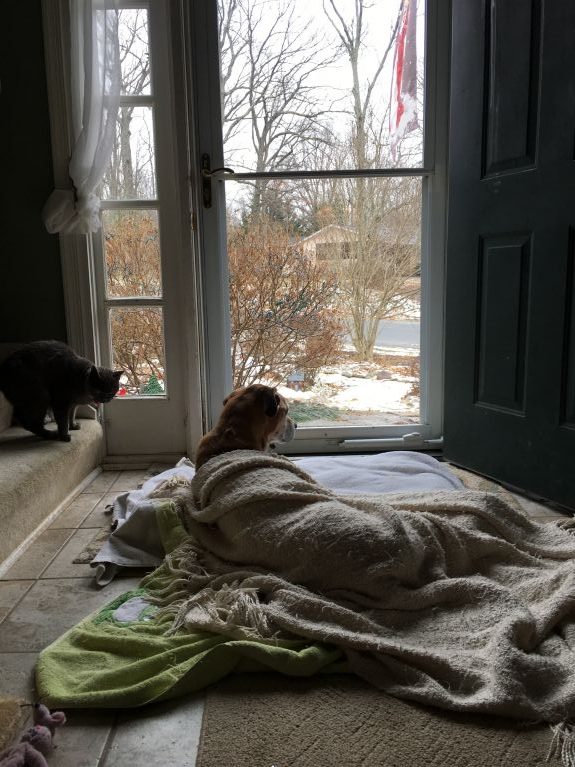