We went to the vet Saturday morning preparing ourselves for bad news. Honestly, we were ok with bad news. If we were told he wasn’t going to walk again, we were ok with that. We had already decided that as long as he’s happy, then we are happy. He’s eatting, drinking and going potty outside and smiling when it’s sunny. We got him into the vet’s office just fine but poor Buddy just shook like a leaf. Actually he shook like one of those old, weird exercise machines from the 50’s that you see on TV, that shakes your hips for you while you stand there doing nothing. OMG, this poor dog. Vet looked him over and suggested we do x-rays to get a better idea of what we are looking at. His heart, despite his trembling and lungs looked very good. So off he went on his little gurney. No, he was not to happy about being carted off on that. Our sweet vet came back with the xrays and a huge smile on her face! She said, ” I have good news guys!” His hip’s look great. His back looks great. His left knee has a completely torn ACL! Well holy cow! We were not expecting that! So, given his age, yes we can do laser surgery but really he just needs rest and a good NSAID to work for him. We also asked about a brace and she said yes that would be helpful. So, we are going to try Rimadyl on him again. He had that about 5 years ago and it gave him diarrhea. But that was 5 years ago. She put him on a low dose and has us increasing his dose after a week so his body can get used to it. He will still take Tramodol 3 time’s a day as well. All good news right?! Well, while we were looking at his xrays our vet shouted “OH! WHAT’S THAT?!” It was a little clip of his lungs that appeared to be dark. She said,” You know guys, cancer in the lungs was always a possibility with him.” But, she wasn’t quite sure what she was looking at because the focus was on his legs and back. Not his lung’s. It wasn’t a full x-ray and it may have been nothing. If he does have cancer in there, he’s not showing any sign’s of it. He’s 15, there’s nothing we can do about that. Chemo is not a choice for us. We just don’t think it’s fair to him to put him through something like that. The cost of that is also a reality that we just can’t do. So we all decided, including our vet, that we didn’t see that.

He’s been on his new med’s since Sunday and appear’s to be handling it well! He seem’s more comfortable. He can stand for a few second’s here and there. He wants to get up on his own and tries really hard but he’s just not ready yet. We ordered him a brace off of Amazon that arrived yesterday. Unfortunately it was to big and the fit wasn’t right. We ordered another one from a different company off of Amazon that should be here next week sometime. Finger’s crossed.

We have hope now. I will give an update on his progress soon! Thank you all for your love and support. It really mean’s an awful lot to us. We love and appreciate our tripaw family.

Old age and arthritis is just the pits sometimes. Buddy has been slowing down as of late. He is having a lot of difficulty in his back left leg, which is the leg he tends to rest on the most. (His amputated leg was his front right leg)He was having good days and bad days with it. He need’s a lot of help getting up. We were assuming it is arthritis so we texted the vet. (Did I mention how awesome she is?) He’s on Vet Best (which has Glucosamine)and Tramadol. We asked if we could increase his Tramadol to ease his discomfort. She thought that would be fine but also suggested adding Gabapentin but at a low dose until he gets used to it. We tried it for 2 days and his condition just got worse. Yesterday, he couldn’t get up at all and needed full assistance. It was like he just couldn’t figure out where his legs were. So we texted the vet last night and she suggested we immediatly take him off of the Gabepentin as it can have a sedating affect but to add in more Tramdol the next day instead as we had first suggested. The hope was that perhaps today he would regain his strength.
Unfortunatly he needed full assistance this morning. We took him out front this afternoon and he still needs full assistance. BUT…he was smiling in the sunshine which was REALLY good to see. There were no smiles in the past few days. He did try really hard to get up on his own but that back leg will just not allow it. So now we are fearful of an ACL problem or perhaps something else. The good news is that he does not appear to be in any major pain. And yep, we know..dogs are pretty stoic about pain. But he smiled a lot in the sunshine today! I’ll take that for now. He is horrified of seeing the vet because remember…he woke up one day there missing his leg! We are frustrated and worried and have decided to wait a few more days to see if the previous drug just needs another day to wear off. I fear we may be off to see the vet wether we like it or not in the next week. Old age is really rough. 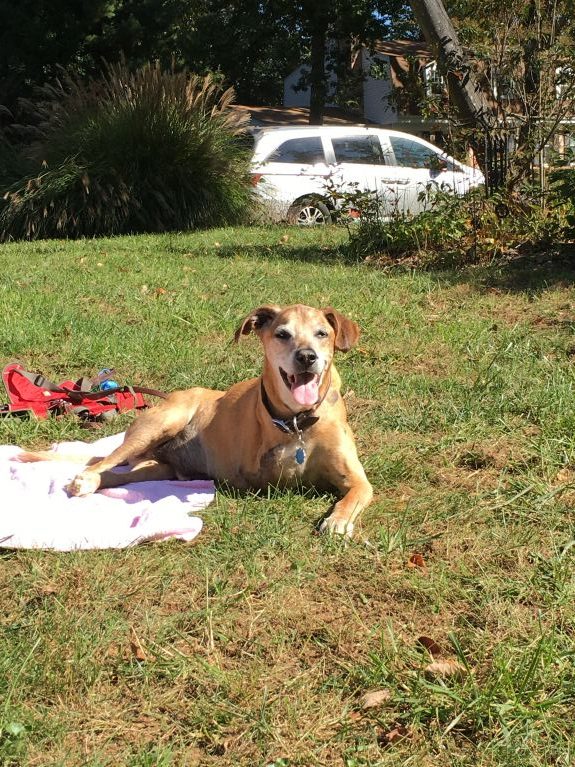 Holy smokes it’s been two year’s! It’s still remain’s the best decision we ever made for our Bud Bud. He’s 15 now and has kind of become the old shoe of the house. The really comfy, good kind. 🙂

Walks are a usual 15 minutes which mostly consists of sniffing and standing around. He’s a bit more wobbly these day’s due to his age. He lounges alot on his one side making his back leg pretty stiff and arthritis has set in. But, he’s happy.

Our daughter, Lindsey, thought it might be good to take him on adventure yesterday and give him a new view. The following picture’s was his reaction. Oh my goodness…happiest dog ever. I think we may have to do it more often!

So here’s to old age and happy doggie smile’s! Happy Amuversary Buddy! We love you!! 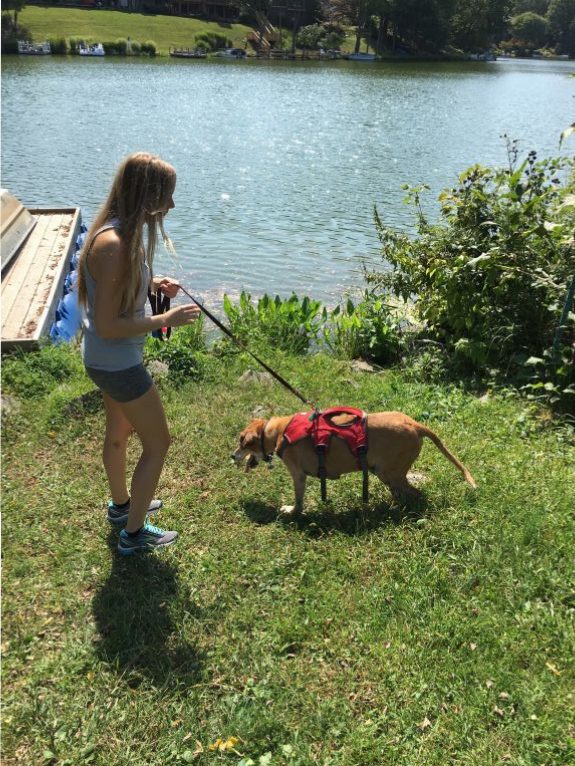 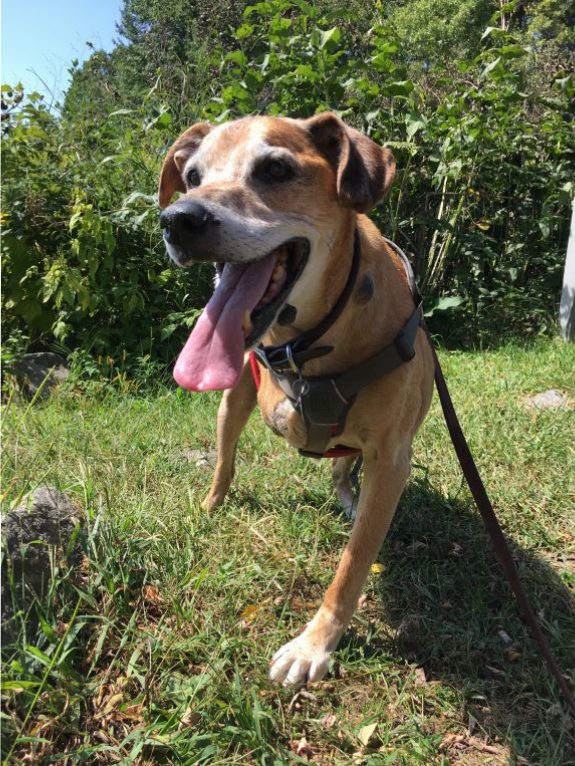 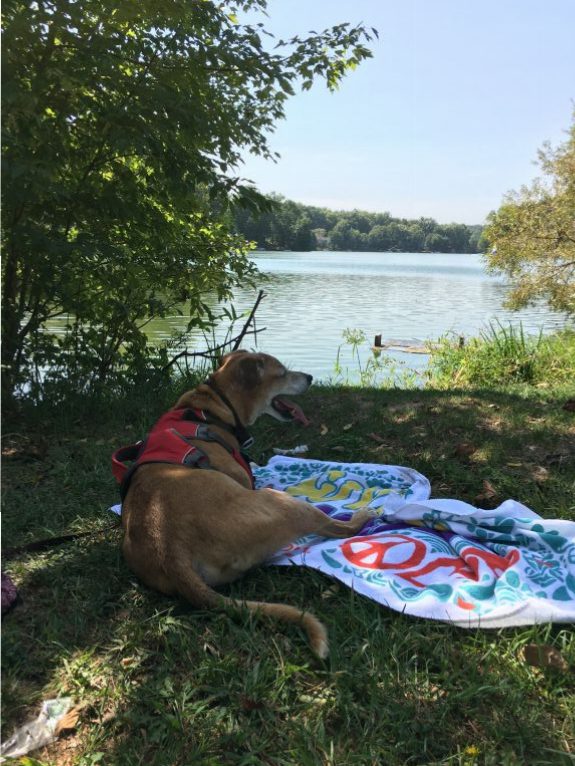 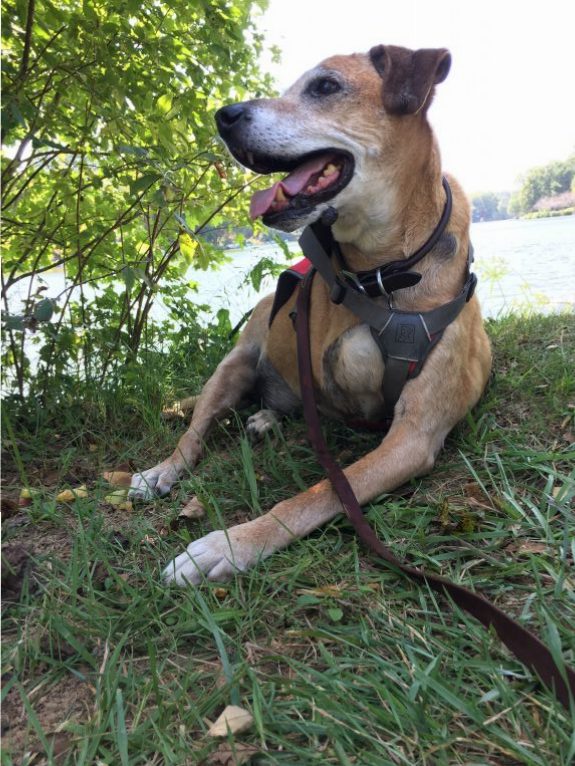 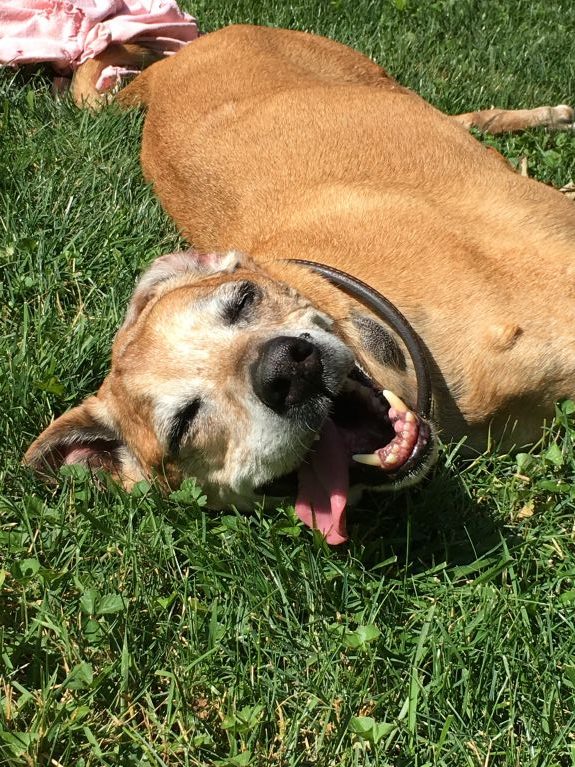 Is this not the best face ever?! Summertime is the best time!
Just a quick check in to say hello and to give a warning about salmon oil! We started noticing that Buddy’s walk’s were becoming shorter. Old age and arthritis is starting to take it’s toll. He’s already on a supplement that helps it but I also read that salmon oil can also aide with the discomfort of arthritis. I found a great product sold on Amazon and tried it out. He loved it but unfortunately, it did not love him. We’re talking diareah for 4 day’s straight in the house and out of the house. ( I am very thankful for a carpet cleaner we had bought a few months ago. Oh Lord, I don’t know what I would have done with out it!)We called the vet and they recommended a teaspoon of canned pumpkin. Who would have thought that canned pumpkin helps diareah! Go figure?! Unfortunatly the canned pumpkin was not enough to help him. I came home from work one afternoon to find him shaking and the floor covered in slimey blood. It was a horrifying sight. Off to the vet we went where he recieved fluids, a prescription for probiotics and anitbiotics. They recommended keeping up with the canned pumpkin as well. He had emptyied eveything out of his small intestines and was now dumping everything out of his large intestine which included slimey blood. Tyankfully he  was on the mend in 24 hours. Poor guy. I left a polite note on Amazon warning people to be very careful of salmon oil and the adevertiser that sold it to us refunded all our money back and gave us a coupon for $5 towards any of their products. I though that was pretty nice. Salmon oil might be good for some dog’s but it certainly was not ok for our’s. User beware! The funny thing is that ever since this bad episode, his walks have gotten better again! We are chalking it up to the warmer weather and the kids being back from college.
Here’s to warmer weather and sun filled days! 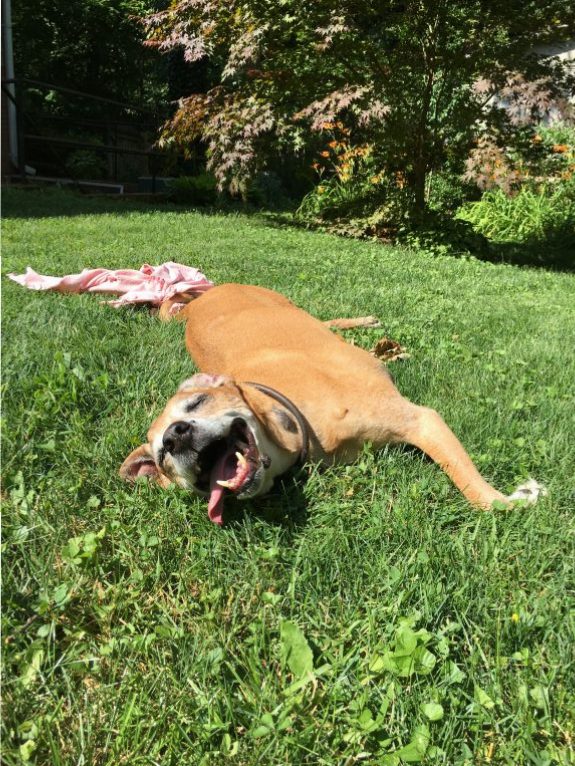 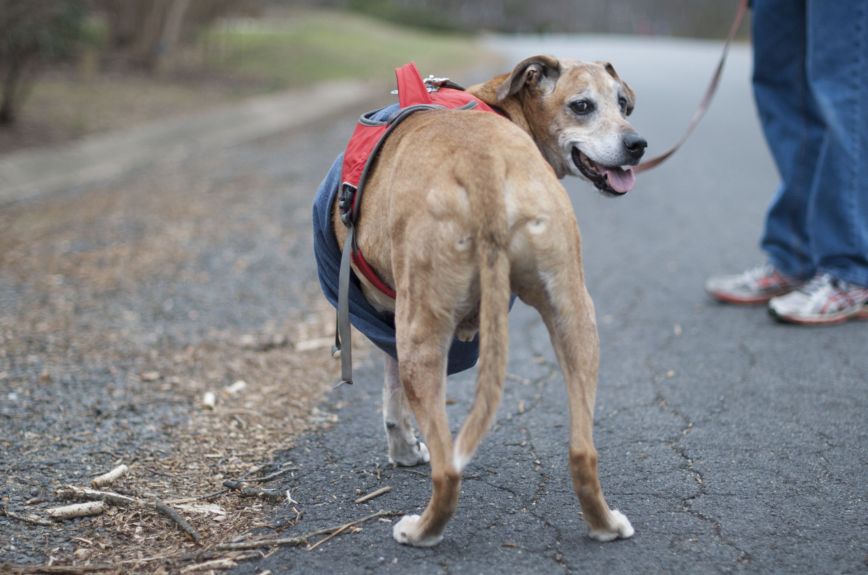 Biopsy results came back Friday night. It’s a soft tissue sarcoma stage 2 out of 3. That means that there is a 20% chance that the cancer could metastasize somewhere else. It’s a slow growing cancer. BUT our vet said he feels he got 99.9% of the cancer out of his chest. He also said,” I think you bought him a significant amount of time.” Are you kidding me?! This was waaaay more than what we hoped for! We are hoping it will never rear its ugly head again. Prayers answered. We are celebrating! 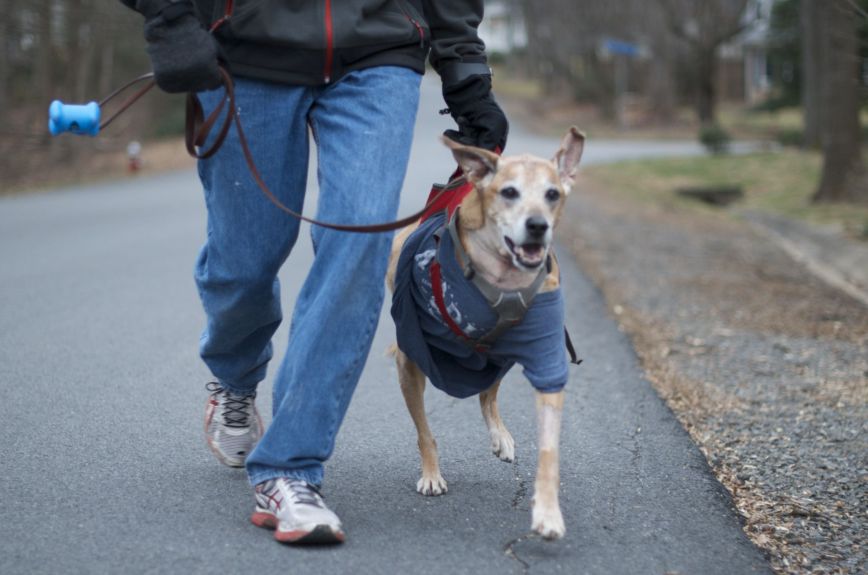 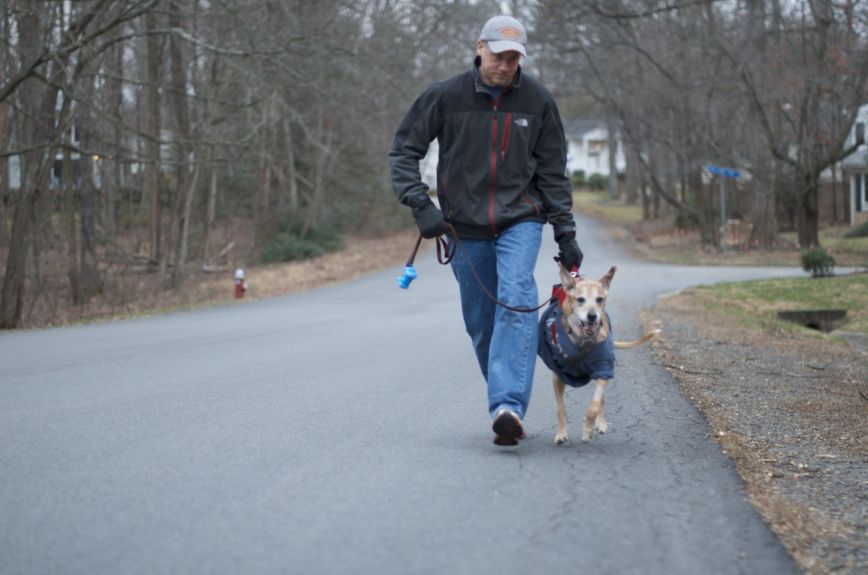 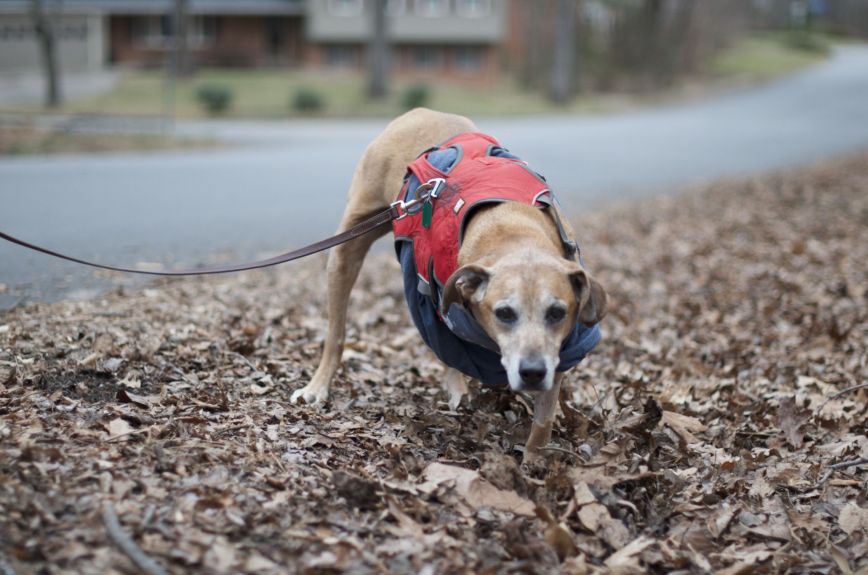 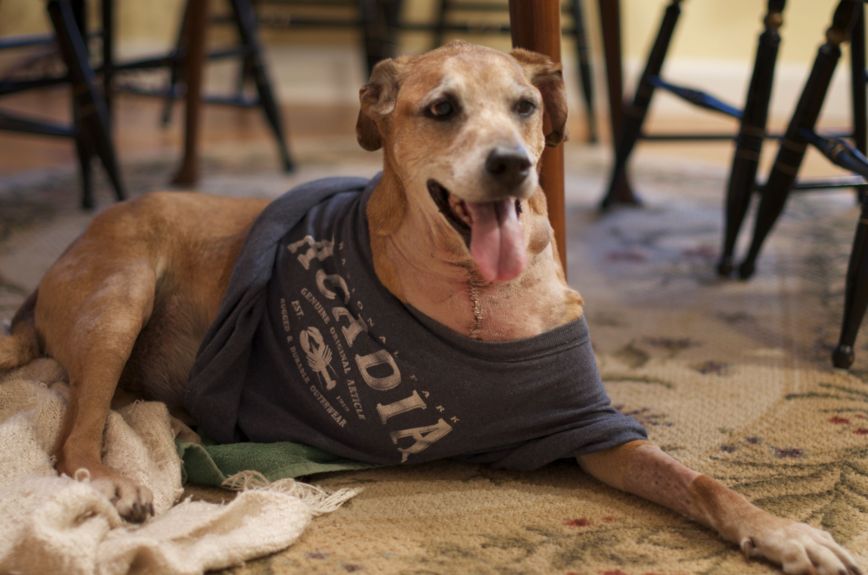